Photovoltaic smart glass converts ultraviolet and infrared to electricity while transmitting visible light into building interiors, enabling a more sustainable and efficient use of natural daylight.

Following on from our expert interviews with senior staff at ClearVue and Ubiquitous Energy, we thought it was high time to do a deep dive into the world of photovoltaic smart glass.

So Let’s Be Clear About This

Many manufacturers refer to this genre as transparent photovoltaic (TPV) glass, but we see no reason for the glass to be limited to only transmitting visible wavelengths (approx. 380 nm to 750 nm).

The photovoltaic (PV) smart glass could theoretically be designed to:

Furthermore, the PV layer does not need to be implemented in glass or plastic, but rather could appear as a plastic film or even a liquid solution.

The one thing all these ‘PV smart glass’ types would have in common is that they incorporate photovoltaic cells embedded inside the glass, thereby allowing them to generate electricity.

Where Do We Find PV Smart Glass?

Whether it is transparent, opaque, refracting or reflecting in the visible region, all PV smart glass allows us to generate electricity from sunlight.

We initially think of buildings as the most common application, and for this reason the technology is often incorrectly equated with ‘Building-Integrated Photovoltaics’ (BIPV).

However, PV smart glass can also be integrated into other applications (with the same aim), giving rise to the following genres:

So What Exactly is ‘PhotoVoltaics’?

In the simplest sense, any photovoltaic cell converts sunlight (photons) into electricity (voltage). This is based on the ‘photovoltaic effect’. 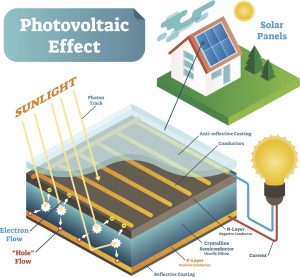 The photovoltaic effect was first demonstrated by Edmond Becquerel in 1839, using an electrochemical cell.

The photovoltaic cells available today are based on solid-state semiconductor technology, most commonly silicon photodiodes, where sunlight incident on the photodiode causes electrons in the valence band to absorb energy and ‘jump’ to the conduction band, where they become ‘free electrons’ capable of contributing to an electrical current.

The current produced by each PV cell is proportional to the number of absorbed photons, which makes PV cells a ‘variable current source’, depending on how much light is incident during the course of the day.

The incident photons must have energy at least equal to the ‘energy band gap’ of the semiconducting material in order to be able to free the electrons. So you can imagine that, by altering the bandgap, we can alter the wavelengths of incident solar radiation that will be converted into electricity.

As the diagram above shows, there is also normally a topmost anti-reflective (AR) layer which stops photons from being reflected away, thus improving the efficiency of the PV cell.

The internal workings of all photodiodes are based on a ‘PN junction’ (which is a positively charged ‘P-layer’ in contact with a negatively charged ‘N-layer’).

It is at this PN junction where the magic works, allowing incoming photons to excite electrons in this region to ‘electrical freedom’, where they can be connected to an electrical circuit and do useful work, such as powering a light bulb, or an IoT temperature sensor.

Let’s now zoom in on the most developed of the ‘PV smart glass’ family members, transparent photovoltaic (TPV) smart glass.

Large areas of TPV smart glass are needed to provide for the energy needs of a whole building, so TPV cells can be embedded inside a window, door or skylight to turn them into electricity-generating devices.

The main difference between traditional solar cells and TPV smart glass is that the latter converts mainly photons from the ultraviolet and infrared regions of the electromagnetic spectrum into electricity, allowing visible wavelengths through to illuminate the building interior.

The same applies to vehicles, smart city hardware and consumer devices, of course.

The diagram below shows the range of wavelengths in the solar electromagnetic spectrum:- 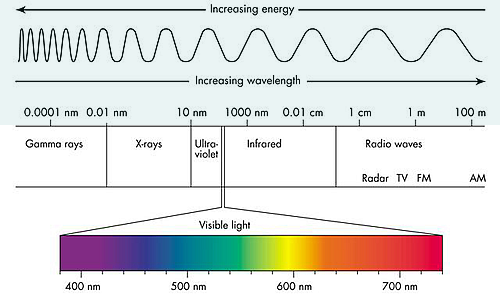 As you can see, the visible part of the spectrum occupies a relatively small bandwidth (shown here from 380 nm to 750 nm), with lower-wavelength UV to the left, and longer-wavelength infrared to the right of it.

TPV cells convert the UV or infrared (which are invisible to the human eye) to electricity via a variety of mechanisms. Let’s take a look at a few of them:

There are several technologies that achieve at least 20% transmittance, with varying levels of efficiency.

Here is a list of the known techniques to date:-

The techniques rely on either:-

The highest transparency reported to date is 86% with a TLSC technology, but this was less than 1% efficient in converting sunlight to electricity.

The most efficient technology so far seems to be Tandem Semi-Transparent Perovskite solar cells, having 12.7% efficiency and 77% transparency.

Elsewhere on this site, we have defined ‘smart glass’ as any glazing medium with modifications to its structure or its behaviour.

These modifications can be surface coatings, internal laminations or electronic circuits embedded in the glass, as in the case of PV smart glass.

When we look at the glass unit as a whole, we need to keep track of all considerations: optical, electrical, mechanical, and acoustic.

We are going to highlight now the key optical and thermal factors that would help us to choose between various competing technologies.

If you choose to install photovoltaic smart glass in medical facilities (such as hospitals, clinics and dental surgeries), you must also consider the colour rendering capacity of the glass.

Glass with a high colour rendering index (CRI) allows all colours to be faithfully depicted, which permits red tissue to appear a true red.

We have more on this topic in our following article about colour rendering.

Strictly speaking, these characteristics apply to any glass, but when we are talking about transparent photovoltaic (TPV) smart glass, we must remember that despite having converted (most of) the infrared into electricity, it will also conduct heat through non-radiative mechanisms.

The U-value is the thermal conductance of a material (it does not only apply to glass).

The U-value refers only to non-solar heat flow, i.e. not radiative heat flow coming from the sun, so this would be more appropriate for TPV smart glass.

A lower U-Value is indicative of a good thermal insulator.

The U-value represents how quickly heat from hot air (not direct sunlight) will pass through the glass. Glass with low U-values are used to keep warmth in the room.

U-values have units of W/m2.K, so 1.2 W/m2.K means that 1.2W of heat will pass through each 1m2 of material per degree of temperature difference (in Kelvin) as measured across the material.

This value is further classified as follows:

This is the measurement of energy conductivity through the middle of a pane of glass whether it is single glazed, double glazed or triple glazed, etc. It does not take into account anything at the edge of the glass such as the spacer bar or the window frame.

This is the energy conducted through the whole window unit (composed of the glazing and the frame). The spacer bar actually plays an important role as a sealant. This is why window U-values are improved using a warm edge spacer bar but centre pane U-values are not.

This is also called the ‘G-value’, the ‘Total Solar Energy Transmittance’ (TSET) or the ‘Solar Factor’.

SHGC is the heat from solar radiation (i.e. sunlight) conducted through the glass. It is a unitless quantity (expressed as a fraction, from 0 to 1).

SHGC includes both sunlight transmitted through the glass and sunlight absorbed by the glass and reradiated into the room. The lower the SHGC, the better its ability to shade the interior from sunlight with the consequent reduction in air conditioning costs.

We would of course expect the SHGC to be less for TPV smart glass, since (hopefully most) of the infrared is being converted to electrical energy.

And finally, we have the LSG which is the ratio of the visible light transmittance to the SHGC.

This ratio measures the relative efficiency of glazing in transmitting visible sunlight while blocking infrared.

Do remember to ask for this parameter when enquiring about transparent photovoltaic smart glass.

In conclusion, we have listed the various types of photovoltaic glass technologies available at this time, as well as clarifying important characteristics and some applications.

This is not the end of the story.

Remember to follow us on social media for more articles about this nascent and growing smart glass technology.

Finally, we list some of the photovoltaic smart glass suppliers and include references below for further reading. 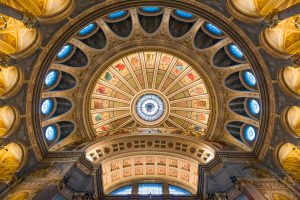 What is SPD SmartGlass?

What is Electrochromic Smart Glass?

25/09/2019
We use cookies on our website to give you the most relevant experience by remembering your preferences and repeat visits. By clicking “Accept All”, you consent to the use of ALL the cookies. However, you may visit "Cookie Settings" to provide a controlled consent.
Cookie SettingsAccept All
Manage consent